Somewhere there is music - School-college … "In an outer-suburban flat, Rita the Landlady is complaining to her two friends, Lil and Marge, about her new tenant who is continually flying through closed windows and leaving his room in a terrible mess (LANDLADY BLUES). Suddenly the mystery tenant bursts in - through the window of course. It is the Man of Steel, greatest super-here of them all, in disguise as mild-mannered (and unemployed) reporter, Clark Kent. Clark is in a hurry this morning as he is about to go for a job interview at the Daily Trivia, the local newspaper where his old school friend, Loïs Lane is working.

At the Trivia, Loïs introduces Clark to cub reporter Jimmy Olsen and the irascible editor Perry White from whom he learns one basic journalistic fact: That it's not important what a reporter says, but how he says it (WE'VE GOT THE NEWS!), Clark does get a job, but is put at the bottom of the pile: he's the new theatre critic! Jimmy is not very concerned about Clark's problem due to a greater one of his own. He knows his secret crush on Loïs is hopeless because she is obviously in love with the Man of Steel (I'M JUST A LOSER). Meanwhile, in a sleazy bar, the dreaded Blackhead gang are having a meeting. These ruthless baddies whose heroes are Al Capone, Scar-faoe Nelson and other movie gangsters (YOU'RE A GANGSTER) have been given an order by the Big Boss to kidnap Loïs Lane as a decoy to get the Man of Steel out of the way. They decide the best time and place for the kidnapping would be that afternoon at the Man of Steel Fan Club meeting, where, so they've been told, Loïs will be interviewing the famous super-hero.

At the Fan Club meeting scores of enthusiastic members sing and march to the official MAN OF STEEL FAN CLUB SONG and generally pay homage to their idol. When the meeting ends Loïs and the Man of Steel are left alone. They are mutually love-struck but are too uncertain of what the other might think if they revealed their true feelings (WONT'T SOMEONE TELL ME). Finally the Man of Steel flies off and the Blackhead Gang rush out of hiding and kidnap Loïs.

Loïs is taken to the Gang's hideout: the old paint factory, where she is gagged and tied to a chair. She learns the names of the gang, their secret weapon (THE RASPBERRY and eventually the identity of the Big Boss. It is none other than Countess Olga from Russia! The Queen of Crime introduces herself to Loïs (BAD GIRL and explains that she plans to destroy the Man of Steel with the aid of a glowing green rock called Kryptonite which is harmful to him. With the Man of Steel out of the way she would then be ruler of the world. Olga instructs her henchmen to send a clue to the Daily Trivia as to Loïs's whereabouts, hoping that when it is published the Man of Steel will work it out and fly right into her trap. The clue is published and the whole world tries desperately to work it out before it is too late. As they do, one fact becomes obvious to all: EVERYBODY NEEDS A SUPERHERO. Finally, but by different means, Jimmy, Perry and the Man of Steel work out the clue. Our superhero rushes off to the paint factory where he walks straight into Olga's clever trap. His power are sapped by the Kryptonite and he is tied to a chair beside Loïs. Olga is ecstatic, realizing that at least she is supreme (I'VE GOT THE POWER). Loïs and the Man of Steel have only a short time to live for above their heads a heavy weight hangs suspended by a rope which is slowly breaking under the strain. In a tender moment Loïs declares her love for the Man of Steel, saying that she loves him as a man, not a superman (SUPERMAN, I REALLY LOVE YOU SO). Superman, I Really Love You So

But all is not lost, Jimmy sneaks in through the skylight and outwits the henchmen who are standing guard. He manages to cover the Kryptonite with paint whose lead base acts as a seal against the rock's harmful rays. Just in time the Man of Steel's powers return. He catches the falling weight and, with the aid of Jimmy, Loïs and the landladies - who have just entered armed with their mops - defeats Olga and her gang. Perry, the Fan Club and the Police then arrive and they all sing in praise of their hero (CLAP YOUR HANDS FOR THE MAN OF STEEL)."

Taken from the cover. 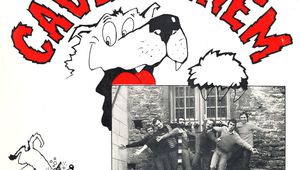 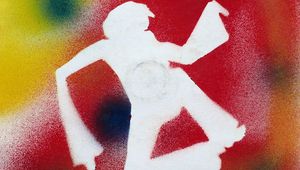 Was there a better way to illustrate the content of this odd concept album about a puppeteer called Maître Pipo...